The "Super" Phase of Matter

Most people are familiar with the three phases of matter that we learn about in elementary school, solids, liquids, and gases.  Each phase of matter is the same material but behaves very differently in each phase.  Ice, water, and steam are all H20, but have different properties and behaviors.   In scientific terms, different scientific laws dominate the properties and behavior of a substance in each phase, but the substance itself remains the same.It is not as well known that there are two more phases of matter than solids, liquids, and gases.  They are the plasma phase and the condensed phase.  Typically, as the temperature increases, a substance will change from the solid phase to the liquid phase to the gas phase.  When a substance gets extremely hot, like in the Sun and in fusion experiments, it will enter the plasma phase.  On the other hand, when certain substances get extremely cold, they enter the condensed phase.  However, the condensed phase can occur in solid, liquid, and gas form.  So it is a very unique phase of matter. 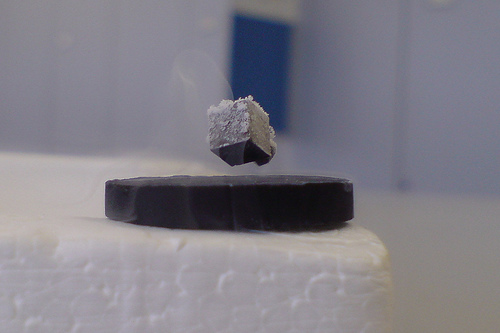 This is a picture of a superconductor floating on top of a magnet.  The superconductor must be kept very cold, at about 72 Kelvin (-201 °C).  If it didn’t warm up and turn back into a normal solid, it would float there forever.   Superconductors have no resistance. That means that they don’t heat up or loose energy when a current flows through it like normal conductors do.  And, a current flowing through it would flow forever.  They also repel magnetic fields, which is why it floats.

The video shows liquid Helium cooling down and transitioning to superfluid Helium.  This is happening at a little above 2 Kelvin (-271 °C).  That’s an extremely cold 2 degrees above absolute zero.  You can see that after the transition, the superfluid is completely still and practically invisible.  It also has lots of other odd characteristics. It has no viscosity which is like friction.  That means that it doesn’t stick to anything and a current in the superfluid will flow forever.  It can also climb the steepest walls because it has infinite surface tension.  It can flow through the smallest crack, and spin forever.  All of these zeros and infinities make condensed matter have very interesting properties indeed.

In order to understand this unique phase of matter, we first need to understand “Spin.”  Quantum particles are sub-atomic particles, like electrons and photons.  Every quantum particle has a spin characteristic, even though they aren’t physically spinning like a top.  But, they act like they are, so we call that spin.

Everything in quantum physics is quantized which is where the name comes from.  “Quantized” means that only certain values which are constantly spaced out are allowed.  And, spin is no different.  It is also quantized.  The constant spacing between the values is 1/2.  That means that we can only have integer and half-integer spin values. 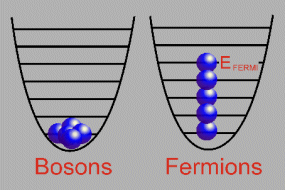 This leads to two categories of particles.  The ones with integer spin like (0, 1, 2, …) are called Bosons.  Photons, which are particles of light, are Bosons.  And, the particles with half-integer spin (1/2, 3/2, 5/2, …) are called Fermions.  Electrons are Fermions.  There are no values for spin other than half-integer and integer values.  But, the spin can be positive or negative.

These two types of particles have very different properties and behavior.  The most important one is called the “Pauli Exclusion Principle.”  It basically says that Bosons are very social and love to be in the same state as other Bosons.  So, photons of light will always bunch together into the same lowest energy state.  But, Fermions are very anti-social and will never be in exactly the same state as another identical Fermion.  So, we will never find electrons in exactly the same state as each other.  Once one energy state is filled up with one positive spin electron and one negative spin electron pair, the next electron has to go to the next higher energy state.  This fact is very fundamental to the entire field of chemistry.

Bose-Einstein Condensation only happens with Bosons, as the name implies.  The social behavior of Bosons allows the atoms or molecules to condense into the same lowest energy state.  The same process works for superconductors, superfluids, and Bose-Einstein Condensates.  However, the Fermionic electrons in a conductor must pair up so that the half-integer spins can add up to an integer and the pair of electrons then acts like a Boson which can condense into a super conducting state. 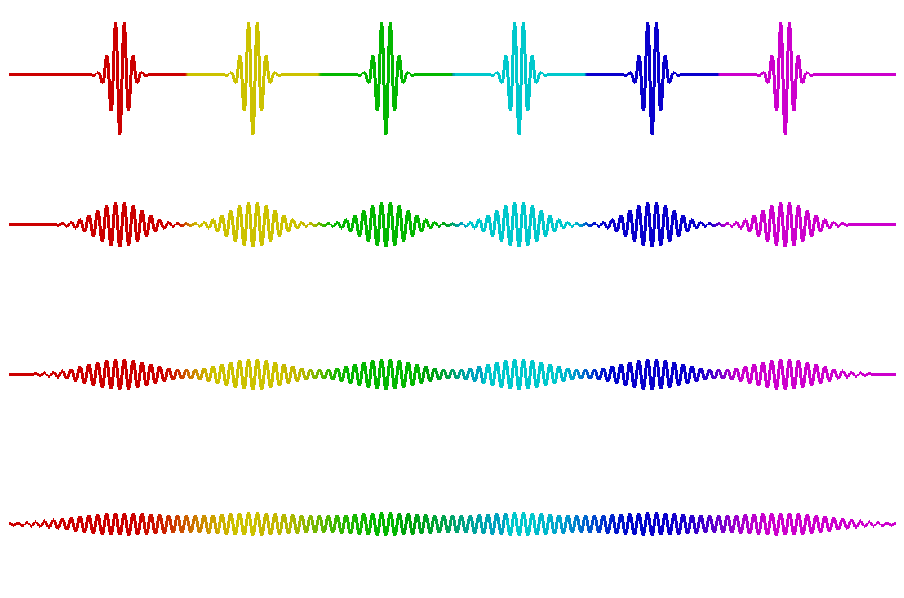 In order to make a Bose-Einstein Condensate, we have to get the Bosonic atoms or electron pairs very, very cold.  The colder the atoms get, the slower they move, which means smaller momentum.  The Heisenberg uncertainty principle tells us that as the momentum gets smaller, the position (width) of the wave packet of the quantum particle gets wider.  So, the tiny little tails that were barely overlapping before start getting bigger and bigger.  When there is enough overlap between the wave packets, they sync up.  Then, they all immediately condense into the lowest energy state.

In this state, all the atoms are operating in perfect unity.  They are all doing the same thing and are all in the same state.  There is also so much overlap between them, that no one can tell where one ends and the next one begins.  They are like one big object doing one thing rather than a bunch of individual separate objects doing their own thing.

It is when the atoms, molecules, or electron pairs are in this completely unified state that the bulk material has all the “super” properties that we described before.  It is the unity among the quantum particle’s waves that gives rise to no resistance, no energy loss, currents that last forever, superfluids climbing up walls and flowing through the smallest crack, and superconductors floating on the magnetic field.  All the individual parts are acting as one big unified object and so have all these “super powers”. 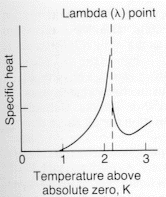 However, getting to that unified state is not easy.  As we cool the atoms down, the harder it gets to cool them down further.  The closer we get to the transition point, the exponentially harder it gets.  We have to put in lots of effort to get a little progress.  Then, we put in more effort and get even less progress.  This seems a lot like life sometimes.  But, the curves do cross at some point.  It does not take an infinite amount of effort to get to the transition point.  It is very hard, but not impossible.  We just have to not give up, keep going, and not get discouraged by the little progress.  It is hard because we are so close.  The difficulty is evidence that the transition point is close.  And, on the other side of the transition, things suddenly get way better.  Besides all the other great properties of being in a condensate, now we put in a little effort and see incredible progress.

not for the weak

This is challenging for me, but I'm enjoying using a part of my brain I don't usually use too much. I'll tackle the last half of this article in the morning when my brain is fresh…

raced through. I need a new brain. This stuff is awesome.

Being an electrical engineer by trade, I had some basic knowledge that superconductors exist.  However, I had no idea why they worked other than that they were near absolute zero for temperature Kelvin.  Also, although I have had a few instances of reading about plasma and condensed materials, I didn't really understand that they are states of matter like solid, liquid and gas.  This article opens my eyes to a lot more things I want to learn.

be". There's a whole lot n there I don't even have words for-right now. I love it when "edumacated" people get God cause it just rocks my world.
Be loved girl
sista Freda
Comments: