There are many similarities between what science has discovered thus far and what the Bible says about nature. This must be the case because, as Christians, we believe that God created the universe and He also divinely inspired the Bible, so they both should show the same truths. Truth is truth and truths don't contradict each other. We all know that our God does not contradict Himself. Many times, however, we don't really understand what God is saying or what science has discovered, and so there appears to be contradictions between the two. However, the contradiction is always because of our own misunderstandings, since truth will always confirm other truths. We do see many cases in nature that clearly confirm the truth found in Scripture. As we study all of what God has made and said in both nature and the Bible, we see daily proof of God's incredible character and love as well as many correlations with what God has said in Scripture.

For since the creation of the world God's invisible qualities–his eternal power and divine nature–have been clearly seen, being understood from what has been made, so that people are without excuse.

Since both quantum physics and the Scriptures talk about the same subjects, we expect to see many similarities, and in fact we do. Many of these similarities would take too long to explain in this short article. But, I will explain one of the most fundamental similarities about the boundary between the physical and non-physical realms.

All the matter in the universe is made up of atoms, like carbon, hydrogen, and oxygen. To give you a sense of scale, about ten million atoms lined up end to end can fit inside one millimeter. Inside these tiny atoms are electrons orbiting around the nucleus. Inside the nucleus are protons and neutrons. Inside those are quarks. Thus, all the stable matter in the universe is made out of electrons, quarks, and a few other particles. On the other hand, all the light and electromagnetic waves in the universe are made up of photons. All these particles are called quantum particles. Quantum particles are the building blocks that make up everything in the physical universe.

Now, quantum physics has discovered that these tiny particles are actually made out of quantum waves. Each of these quantum waves has a constant amplitude and frequency. These spread out waves combine together to make the tiny confined quantum particles. This paradox is called, “Wave-Particle Duality.” For example, light particles, which are called photons, are made out of electromagnetic waves, but the other particles are made up of other kinds of waves. 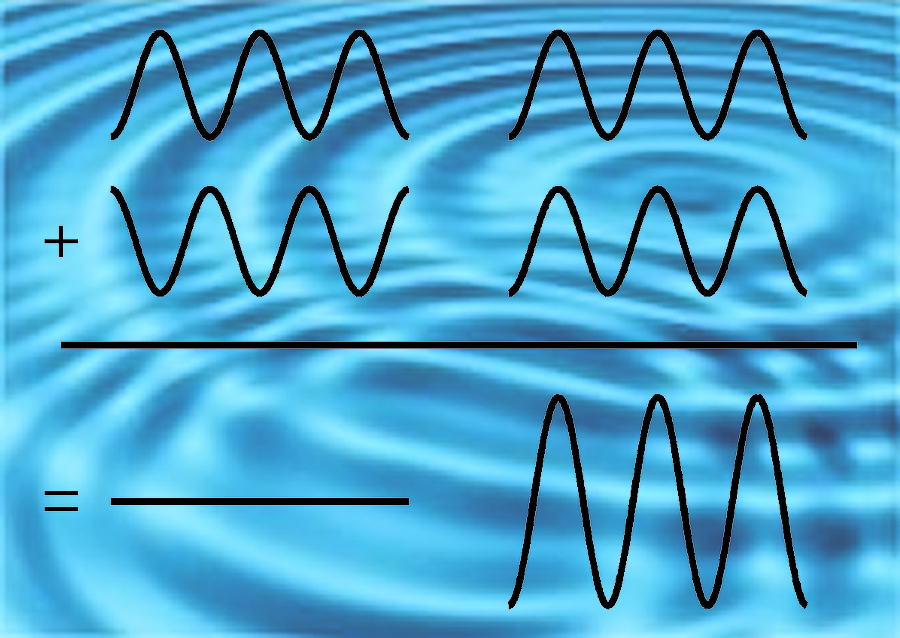 This paradox is not very difficult to resolve when we understand how waves work. All waves combine by using interference, just like the ripples in a pond. Where there are two peaks, they add up to make a bigger peak. Where a peak and a valley overlap, they cancel each other out and the total is flat. When waves with very close frequencies are added together, we get a beat pattern. This is the same way we get beats in music. We can carefully choose which frequencies and amplitudes to add up to make any combined total pattern we want.

In a quantum particle, the waves add up to make a packet with a bell curve distribution. To the observer, very far away, these packets can look and act like a tiny little ball. The tails extend out forever in all directions, but they are so small, they are practically zero. Thus, the quantum particles have practically no effect on each other when they are not very close together. However, the underlying waves that build up the packet still have their constant amplitude everywhere all the way out to the edge of the universe, but they are hidden by the interference and have no physical effect. 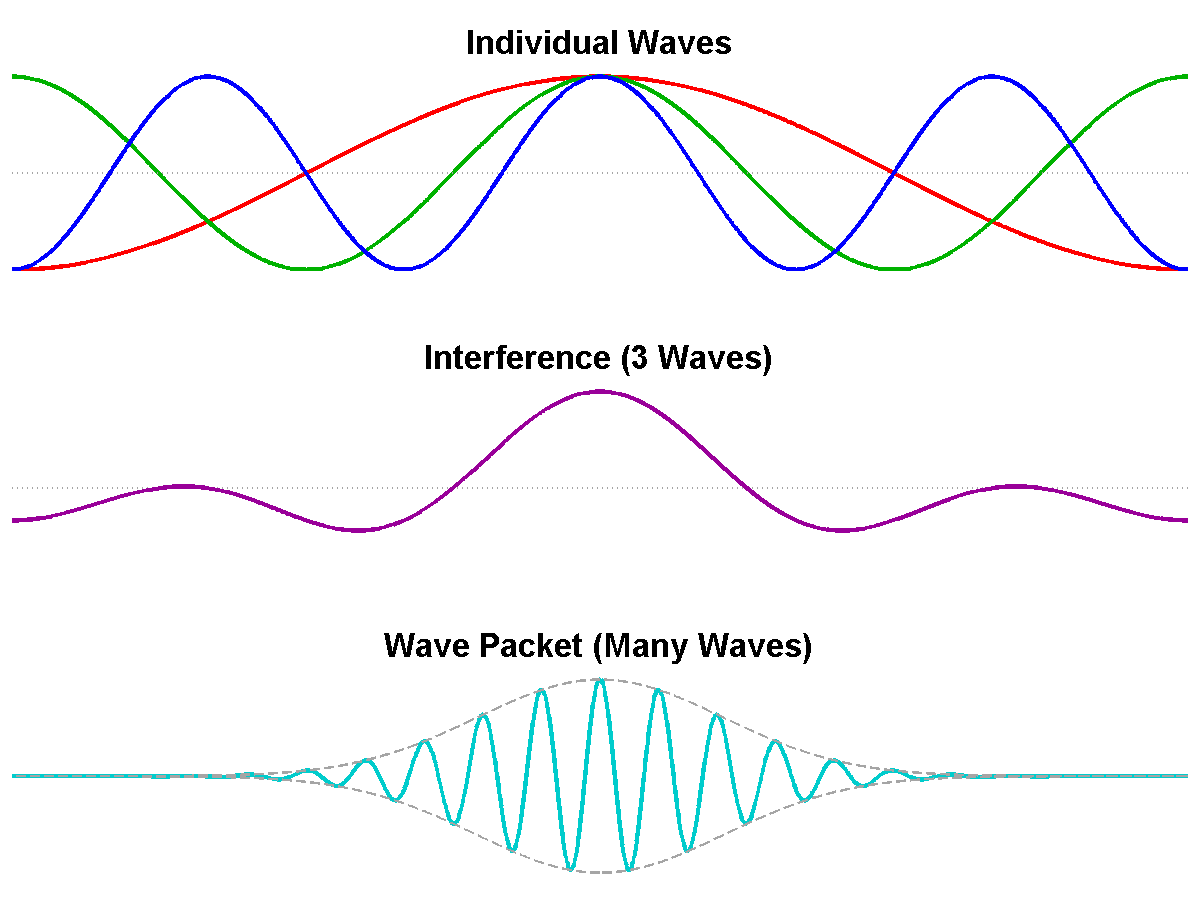 The unknown medium that electromagnetic waves, like light, are waving in was named the “Ether”. In 1885, Michelson and Morley did an experiment to try to find out more about the Ether. What they found was that the Ether did not physically exist. This discovery was very upsetting to the scientific community at the time and still is today. How can light waves be waving in nothing? It is like having a water wave with no water. We can all measure the waves and interact with the waves, but there is nothing there to be shaking. This disturbing experiment was redone by many others with the same results. The Ether does not physically exist or at least it is not physically observable. Science has since made many robust mathematical models and done many other experiments to show that this is indeed true and necessary to account for everything we can see.

The consequence of the fact that the Ether does not physically exist is that light and matter quantum waves are waving in nothing, nothing physical anyway. Therefore, the entire physical universe is ultimately made up of nothing physical. Personally, I summarize what science has to say about this by saying that Someone or something is waving nothing and making something. 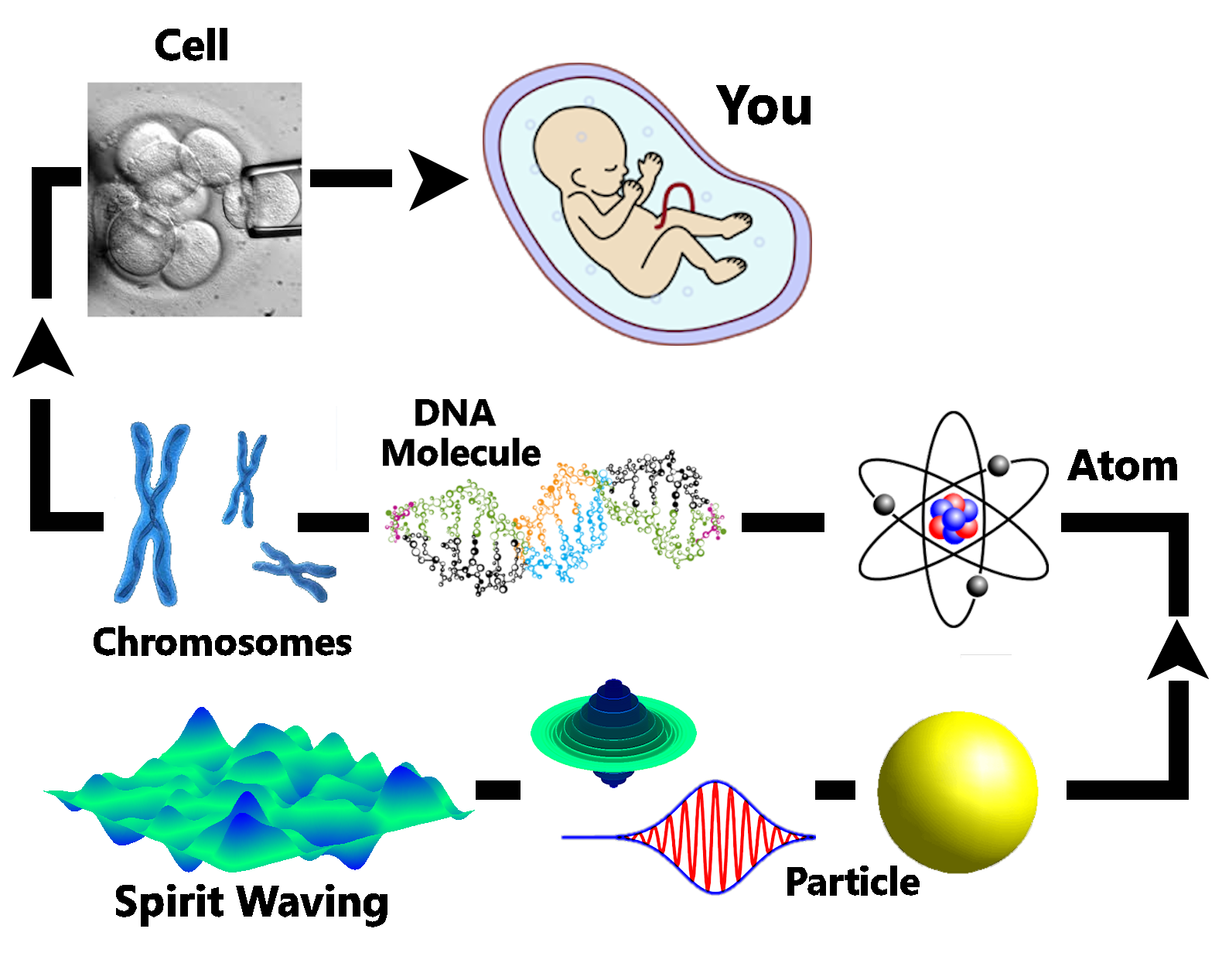 Now, let’s look in the Bible to see what God said about the way He made quantum particles and thus the entire physical universe. Since we believe that God authored both the Bible and nature, we can expect to see correlations between the two. All references are taken from the NIV with my own emphasis added.

By faith we understand that the universe was formed at God's command, so that what is seen was not made out of what was visible.

Now the earth was formless and empty, darkness was over the surface of the deep, and the Spirit of God was hovering over the waters.


The word for hovering in the Hebrew can also be translated shake, flutter, or move. In the beginning, God was shaking or vibrating the formless emptiness like water waves and creating the physical objects we see around us. We see this in science too. In the earliest moments of creation, there was only the chaotic waving of the quantum waves. Then, the waves calmed down enough to form quantum particles, atoms, stars, planets, and all life. We see God’s hand in all of creations from the earliest moments until now.

but in these last days he has spoken to us by his Son, whom he appointed heir of all things, and through whom also he made the universe. The Son is the radiance of God's glory and the exact representation of his being, sustaining all things by his powerful word.

He is before all things, and in him all things hold together.


Through His word, God sustains all things. God is spirit and His words are also spirit. When God speaks, it vibrates the spiritual realm. God is sustaining and directing the waving of the spiritual substance that makes up everything physical. As God guides and directs the waving, it changes the interference pattern, which in turn changes the physical manifestation of all the objects and people in the universe. Thus, God is in complete control of everything at every moment. God didn’t just set the universe in motion and walk away. God is intimately involved in every tiny detail at every moment. God is holding us together and sustaining us in the depths of our spirits and in the smallest quantum particles of every atom of our bodies.

In all these Scriptures, we do see the correlation between what the Scriptures say and what science has discovered. The Bible says that the visible physical universe is made out of some invisible non-physical, eternal substance. It also says that God is holding, sustaining, and controlling all things including the quantum waves.

Quantum particles are made out of non-physical quantum waves. These non-physical waves interfere with each other in precise ways to make a physical wave packet, which is the particle. The Creator is constantly sustaining and controlling the waves, but the waves themselves are created. There is a difference between the created spiritual realm and the creator. Like the difference between a painting of an artist and the artist. The painting has the artist's image and was made out of the artist's heart, but is distinct from the artist. The artist has put himself into the art, but is not the art.

These things not only show one way that science and the Bible say the same thing, but also reveals some aspects of God's character and nature. We see that God is constantly holding, sustaining, and directing the vibrations and interferences of these non-physical quantum waves. As He controls the waves, He controls what they make up, which is everything. Not only is God bigger than the universe, He is holding and sustaining the smallest waves in the universe. I encourage you to ponder what this tells you about God's sovereignty, power, and control as well as His other characteristics. And remember, that the Spirit of God, who is incredibly in control of everything and holding each of us together, lives in you and you live in Him. (John 14:20)

We can't do anything without God sustaining us in the depths of our being. We can’t sit here, breathe, or even exist without maintaining the waving of our quantum waves. If God weren’t sustaining the waving of our non-physical quantum waves, we would cease to exist. Since we do exist, we can be confident that God has not left us or forsaken us. God is always holding us together whether we are aware of it or not and whether we want Him to or not. No matter what we do or don’t do, God is faithful to us and keeps sustaining our existence.

There are many other interesting qualities and phenomena that arise from the wave like nature of the quantum particles. These qualities make quantum particles behave very differently from larger object that we can see. But, that is well beyond the scope of this article. If you would like to learn more about this subject, check out my new book, “Heaven’s Reality: Lifting the Quantum Veil.”

There have been no comments yet